From familiarity with technology to parenting techniques and seemingly everything in between, the generations in the United States are often described as each having a unique outlook on life. A lot of these differences come from how culture changes over time, as well as shifts in political and social realities over the years. But each generation also has needs that are specific to their stage of life. For example, Baby Boomers may be looking forward to, or enjoying, retirement, while Generation Z may just now be entering into the workforce.

This got us wondering. Cities across the U.S. have distinct policies, populations, job openings, and housing markets. Because of this, certain cities are better-equipped to suit the specific needs of one generation over another.

At TYE Medical, we think it’s important to recognize and embrace what comes with each stage of life. So we decided to take a look at the best U.S. Cities for each generation, depending on a number of factors. Read on to discover what we found!

What makes a city the “best”?

We looked at a combination of factors uniquely important to each generation to calculate a score for the 50 largest metropolitan areas across the nation. Data was collected from the U.S. Census and other publicly available resources, highlighted below.

Baby Boomers, born from 1946-1964, may be grandparents and are likely retired or looking forward to retirement. This led us to the following factors, which were used to identify the best cities for Baby Boomers:

On the other hand, Generation X, born from 1965-1980, is likely to be at the peak of their career and parents of school-aged children. Therefore, we used the following factors to calculate the best cities for Generation X:

Millennials, born 1981-1996, are likely starting a career and buying a home. These assumptions led us to the following factors for determining the best cities for Millennials:

Generation Z, born 1997-2012, are likely to be full-time students, working part-time or very early on in their career. Because of this, the following factors were used to identify the best cities for Generation Z:

We assigned weights to each factor based on its level of contribution towards a generation’s quality of life. Lastly, we calculated the sum of each weighted factor, which gave us an overall city score for each city. The highest possible city score was 25.


The Best Cities for Baby Boomers 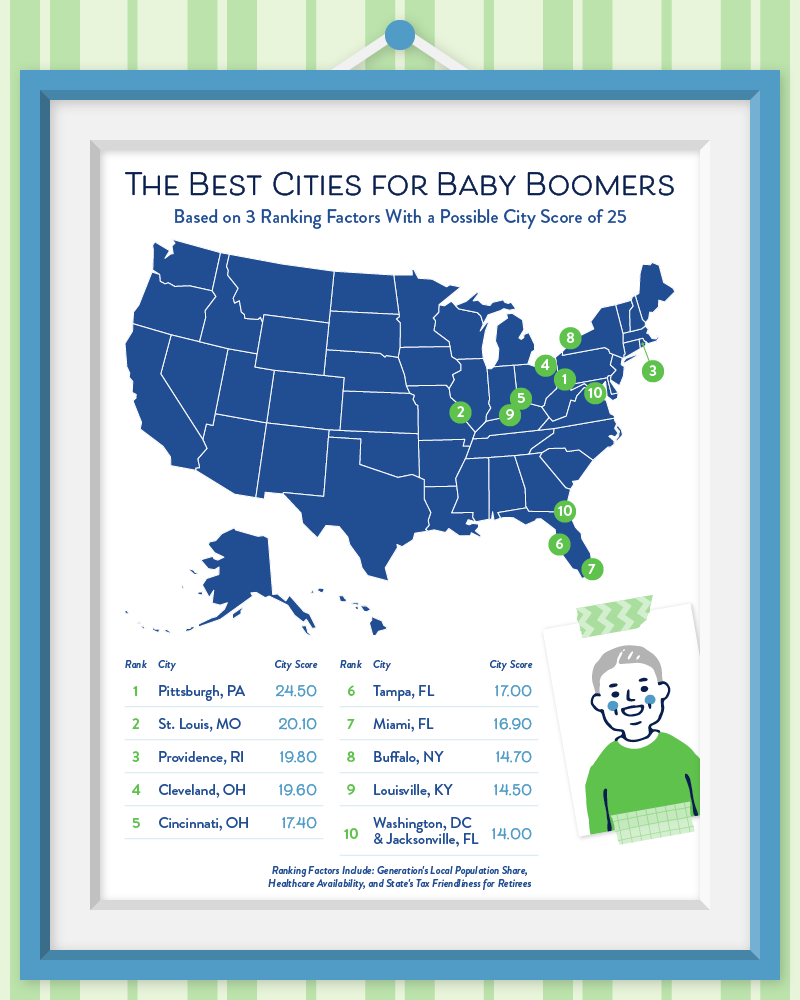 Pittsburgh, PA, is the city-to-be for Baby Boomers! With a whopping city score of 24.5 out of 25, Pittsburgh beats out the second-best city by over 4 points. As shown on the map above, the top 10 cities for Baby Boomers are concentrated in the eastern part of the country. And, unsurprisingly, three of these cities are in the sunny state of Florida. Although the number-one city for Baby Boomers has a higher score than the top city of any other generation, these top Baby Boomer cities in the United States have the largest range of scores, suggesting there are more noticeable differences between each of the locations.

The Best Cities for Generation X 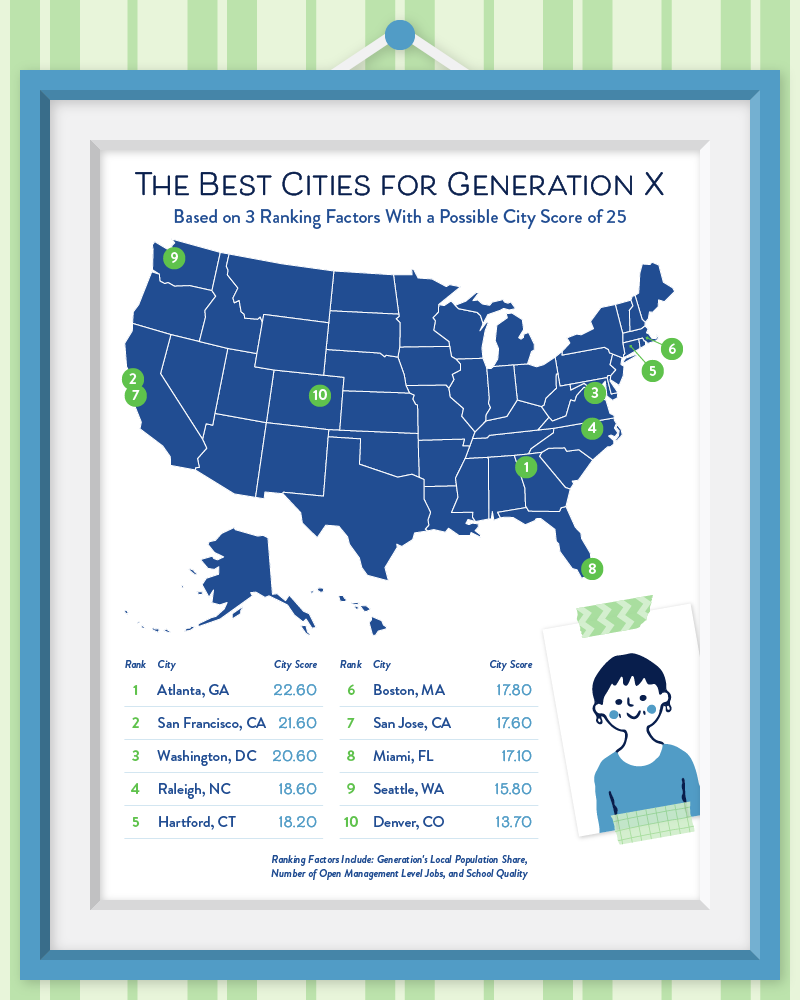 Atlanta, GA, is the best city for Generation X with a city score of 22.6. Close behind at a score of 21.6 is San Francisco, CA. These top 10 cities for Generation X are spread throughout the country, and only two cities earned a score less than 17 (Seattle, WA, and Denver, CO).

The Best Cities for Millennials 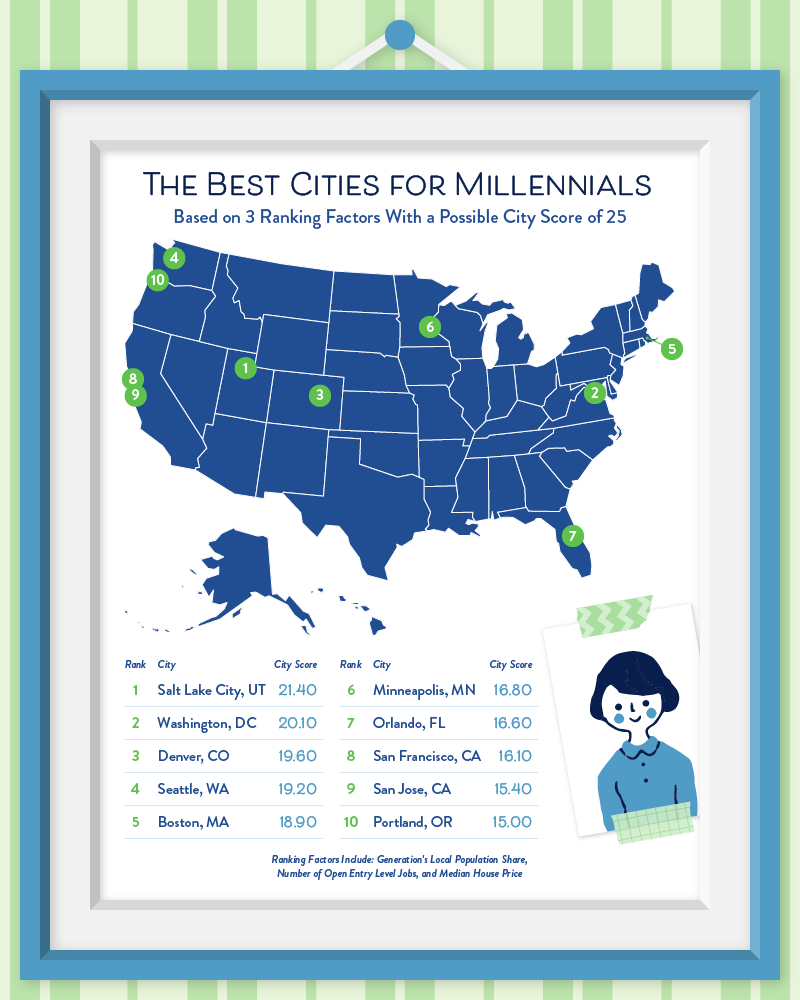 Salt Lake City, UT, is the best place for millennials to be! With a city score of 21.4, Salt Lake City scored 1.3 points higher than second-place city Washington, D.C. The top 10 best cities for Millennials feature more west-coast locations than any other generation, such as Seattle, WA, San Francisco and San Jose, CA, and Portland, OR. 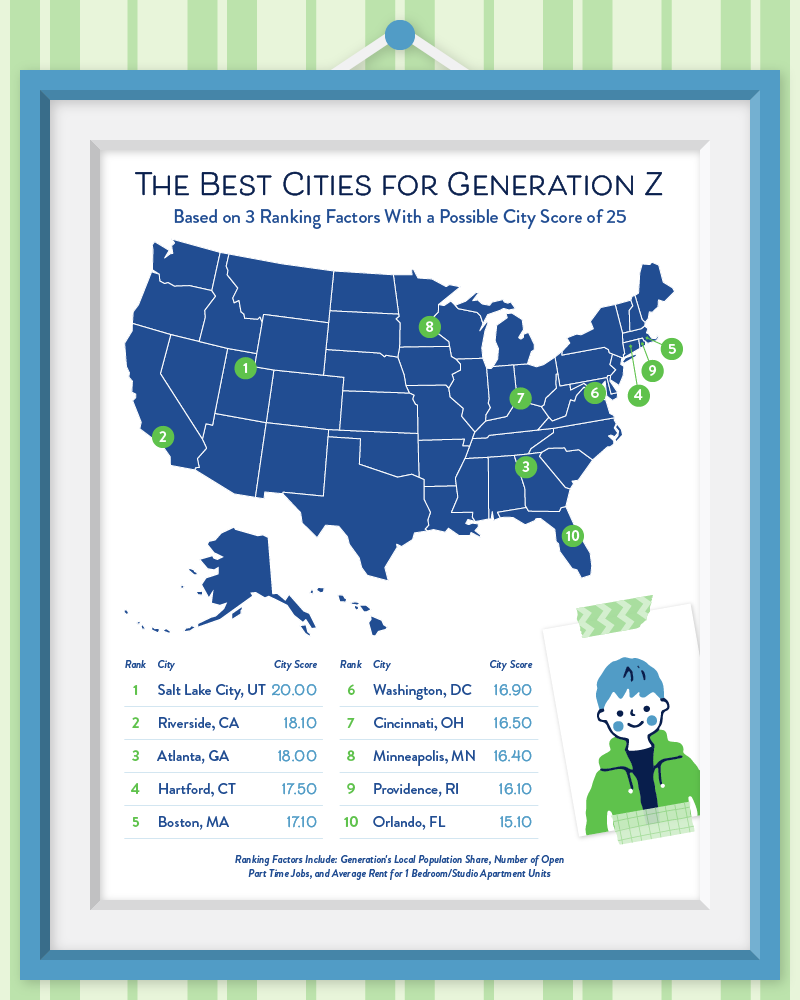 Once again, Salt Lake City, UT, is ranked as the best city with a score of 20 for Generation Z. On the other side of the U.S., there is a cluster of top-ranked Generation Z cities in New England, including Harford, CT, Boston, MA, and Providence, RI.

Interested in how your city stacks up if it didn’t make the top cities? Check out our full dataset, with information on each ranking factor for each generation, in the interactive table. Click on a column header to sort the data by that factor!

Different cities are better suited to meet the needs of one generation over another. In fact, Washington, DC is the only city that ranks in the top 10 best cities for each generation-- so perhaps if your family crosses multiple generational borders, it’s the place for you!

Remember, every generation has its own, unique needs. TYE Medical is here to help you embrace and move through the different stages of life, with a particular focus on the potential needs of older adults. Check out our solutions for incontinence issues, which could be related to diet, aging, or illness.