When your digestive system is off, everything feels off. It has a powerful influence over your entire body. That's why some in the medical community refer to your gut (a.k.a. gastrointestinal tract) as your "second brain."

If you've been diagnosed with irritable bowel syndrome, you've probably wondered what causes IBS. And just as importantly, does it have anything to do with your urinary symptoms?

Once called "spastic colon," an IBS diagnosis means you have a gut that's more sensitive than most people's. Since your system overreacts to certain foods or food ingredients, multiple food intolerances are a tell-tale sign of IBS.

It's common for people with IBS to develop bladder symptoms also. Although these are different conditions, they often co-exist.

Let's take a closer look at the causes of irritable bowel syndrome, its connection with bladder conditions, and how to manage it through diet. 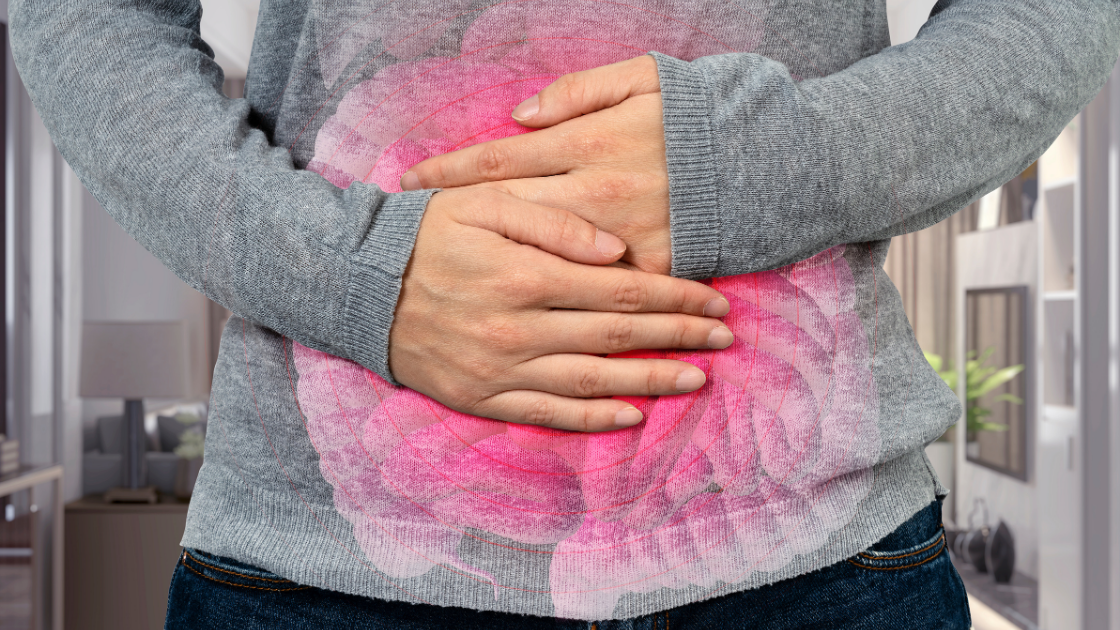 While what causes IBS largely remains a mystery, the symptoms are well known – and extremely uncomfortable. If you've been diagnosed with IBS, then you're probably aware of the more immediate signs like:

These symptoms can be mild, severe, or somewhere in between, and they don't always occur together. For example, cramping might be occasional, even though constipation is frequent.

Some common IBS symptoms are less obvious and might be blamed on other health conditions or completely overlooked. This includes symptoms like:

Just as no one knows what causes IBS, researchers aren't yet sure why some IBS patients experience these more general symptoms along with GI (gastrointestinal) distress.

But there are two critical facts to remember:

Different Types of IBS (and Is It the Same as IBD?)

Before diving into theories about what causes irritable bowel syndrome, let's look at the different types and how to distinguish them.

IBD (inflammatory bowel disease) is an entirely different condition involving chronic inflammation of the digestive tract. Crohn’s disease and ulcerative colitis are considered types of IBD, and both conditions can damage your intestines – unlike irritable bowel syndrome.

Theories About What Causes IBS 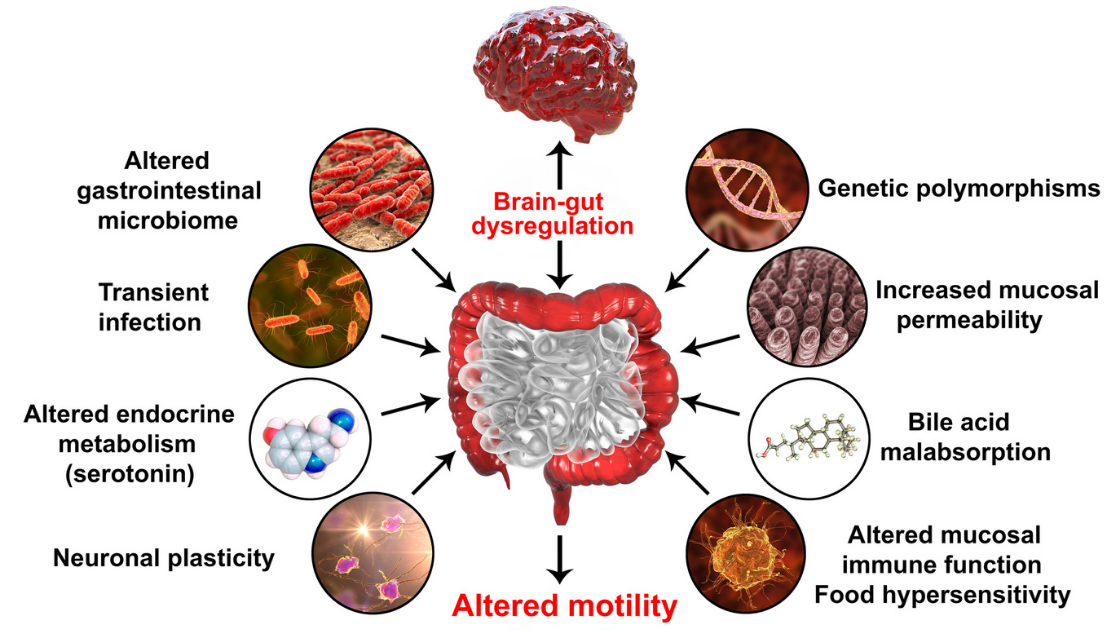 Even though researchers haven’t pinned down a specific cause of IBS symptoms, they have developed a few theories, all of which could play a role.

In some cases, the muscles lining the inside of your intestines might not function properly. If muscles contract too strongly and for too long, food moves through your system too quickly, causing diarrhea, bloating, and gas.

If the contractions are too weak, food moves through your system too slowly, causing constipation, hard stools, and bloating.

Nerves in your digestive system might be overly sensitive, triggering more significant discomfort when gas or stool stretch your abdomen.

According to this theory, there is a miscommunication between the nerves in your brain and your gut. This might cause your body to overreact to various aspects of the normal digestive process, resulting in pain, diarrhea, or constipation. In other words, simply digesting any type of food could trigger symptoms.

Bacteria, fungi, and viruses naturally live in your intestines and (ironically) help keep your system healthy. But people with IBS might have developed an imbalance in the gut microbiome that has contributed to their condition, creating an unhealthy GI environment.

A bacteria or virus that causes a severe bout of diarrhea might initiate the onset of IBS in some patients. If you’ve experienced memorable intestinal distress or an illness that caused severe diarrhea, it’s helpful to mention it to your doctor.

Again, researchers aren’t sure why, but stressful or traumatic events (especially in childhood) make you more susceptible to developing IBS symptoms. Again, this doesn’t mean that stress causes most IBS cases. Rather, childhood stress might make it more likely for IBS to develop in people who are already predisposed to it.

Since stress is known to trigger gut imbalances and other urinary and bowel troubles, this isn’t as surprising as it first might seem. 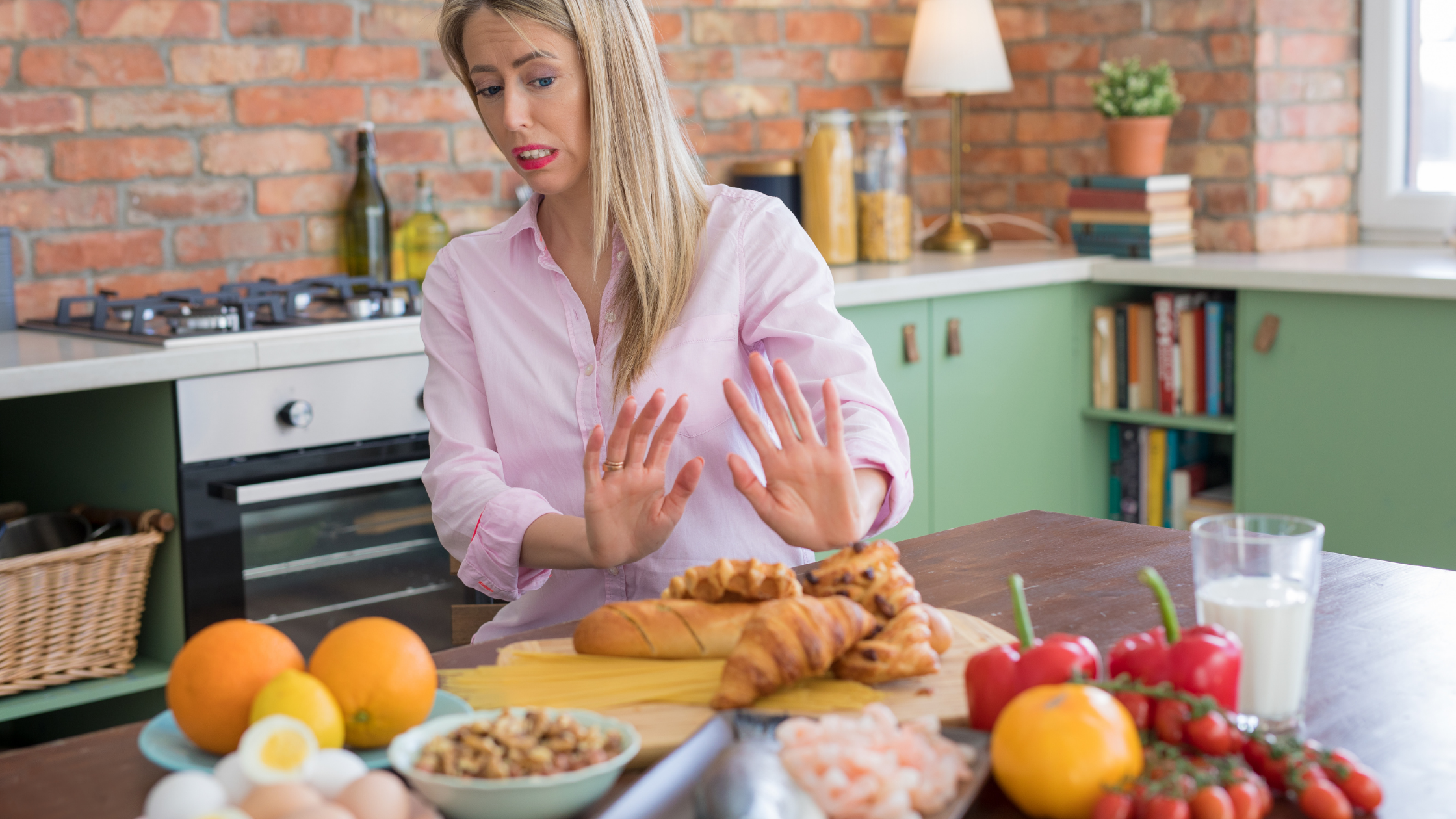 understanding what aggravates your symptoms.

Like many other illnesses, IBS has specific triggers that aggravate symptoms. Since it’s a digestive condition, you can bet that what you eat (or drink) matters!

But be advised –sometimes symptoms occur independently of what you’ve eaten. Just your normal digestive process can trigger discomfort, pain, or intestinal problems. The underlying condition remains, even if you’re avoiding all trigger foods.

However, eating certain foods can make symptoms worse. But the catch is that these trigger foods aren’t the same for everyone. This means you’ll need to pay attention to your diet and your body’s reaction to those foods and beverages.

We’ll address how to adopt an IBS-friendly diet (commonly known as FODMAP) a bit later in the article.

But for now, there’s more to consider than just what you put in your mouth.

Since some researchers believe that a miscommunication between your brain and gut causes IBS, it’s not surprising that stress and anxiety can trigger increased sensitivity in your GI tract.

So, even if you’ve eaten a particular food before with little or no consequence, you might have a stronger reaction to it when feeling anxious or stressed. The increased sensitivity will either speed up your system, causing diarrhea or slow down your system, causing constipation.

In the long term, anxiety intensifies IBS, which you can read more about here.

Keep in mind that stress isn’t what causes IBS (not according to most researchers) – but it’s a major symptom trigger for some people.

A 2012 study suggests that women with IBS are over 33% more likely to develop overactive bladder than those without IBS symptoms. It’s also well-known that IBS is linked to several urinary tract conditions like:

Even if IBS patients haven’t been diagnosed with a bladder condition, they frequently report urinary symptoms like:

Just as we don’t know what causes IBS – we also don’t know precisely how it relates to bladder conditions, even though the bladder-bowel connection is well established.

It might seem overwhelming at first, but there is some overlap in how you manage both conditions. For instance, many foods that aggravate your bladder might also irritate your GI tract, and vice versa. This means you can work on pinpointing these foods and eliminating them, improving symptoms for both disorders.

Likewise, many of the foods that are healthy for the bladder will be good for your gut too.

Since stress and anxiety aggravate both urinary and gut symptoms, minimizing them while monitoring your diet will go a long way toward improving symptoms.

Managing IBS means figuring out which foods trigger your GI distress and how much of a particular food you can tolerate. The FODMAP diet plan is an elimination diet that helps you root out the offending foods systematically.

Much like an elimination diet for food intolerances, following this approach means that you eliminate a long list of foods from your diet (including many healthy foods) for a limited period.

Then, you slowly incorporate specific foods into your diet (one at a time) to determine if it triggers symptoms. If it doesn’t, you can add that food back to your regular diet. If it causes symptoms, then you can eliminate it for the foreseeable future.

No one is meant to stay on a FODMAP diet plan (that eliminates all or most foods on the list) long term.

Remember that trigger foods aren’t what causes IBS – and eliminating them won’t cure you. But it will help you manage your symptoms. For tips for choosing an IBS Diet plan, check out our article Which IBS Diet Plan is Right for You?

A Brief Overview of FODMAP

It stands for fermentable oligosaccharides, disaccharides, monosaccharides, and polyols. Yes, these are scientific food terms that you probably won’t recognize – but you’ll recognize the foods that contain them.

In essence, FODMAP foods are what to avoid eating if you have IBS. Fancy words aside, you’re essentially avoiding the various types of sugars that your small intestines struggle to absorb.

These sugars (short-chain carbohydrates) often remain in the gut and ferment, trapping gas and water in your intestines. Hence, all those nasty symptoms like bloating, gas, pain, and changes in stool.

When trapped gas and water stretch your intestines, you get that uncomfortable bloated feeling, and your abdomen might even distend.

Examples of high-FODMAP foods to limit or avoid:

Additionally, many people with IBS find that these types of food also trigger their symptoms, even though they aren’t FODMAPs:

The common IBS trigger foods cause your system to react with intensity, much like the FODMAPs.

For a complete list of FODMAP foods, see information from IBSdiets.org.

If non-FODMAP foods often trigger your symptoms, consider these other IBS-friendly diets that might address your specific needs more effectively.

Be sure to talk with your doctor before drastically altering your diet. 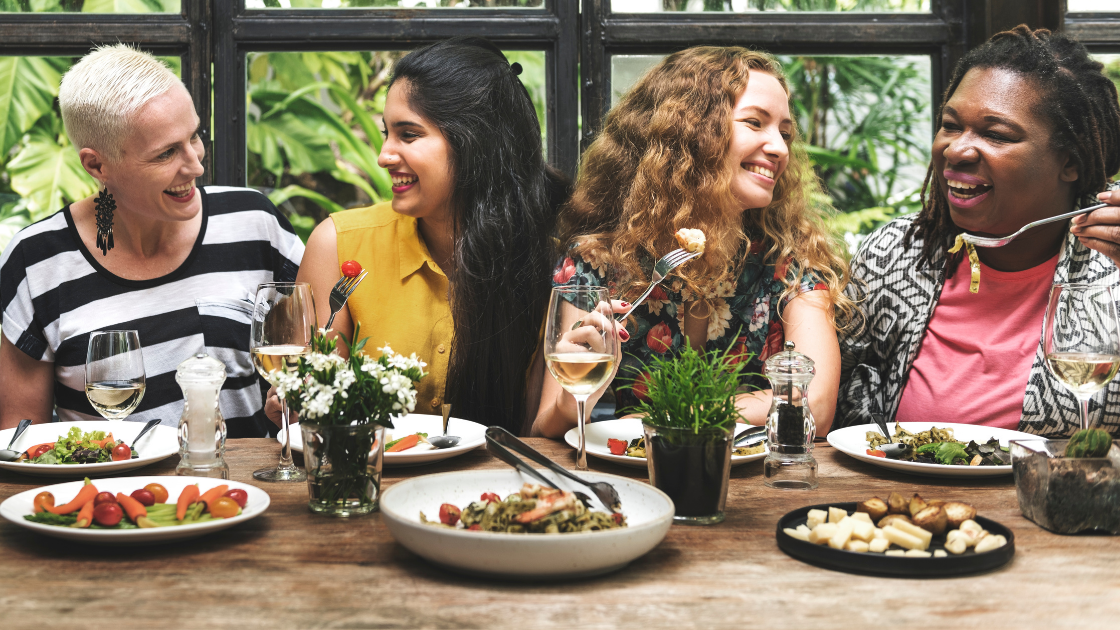 We get it – it’s not always easy to adjust to a leaking bladder. As you learn to manage your IBS, you’ll also need the right leak protection. Just because your condition makes you more prone to urge incontinence and OAB, it doesn’t mean you have to live in fear or embarrassment.

Need more moderate or heavy protection? Our Protective Underwear will offer the discreet comfort you want along with the absorbency you need.